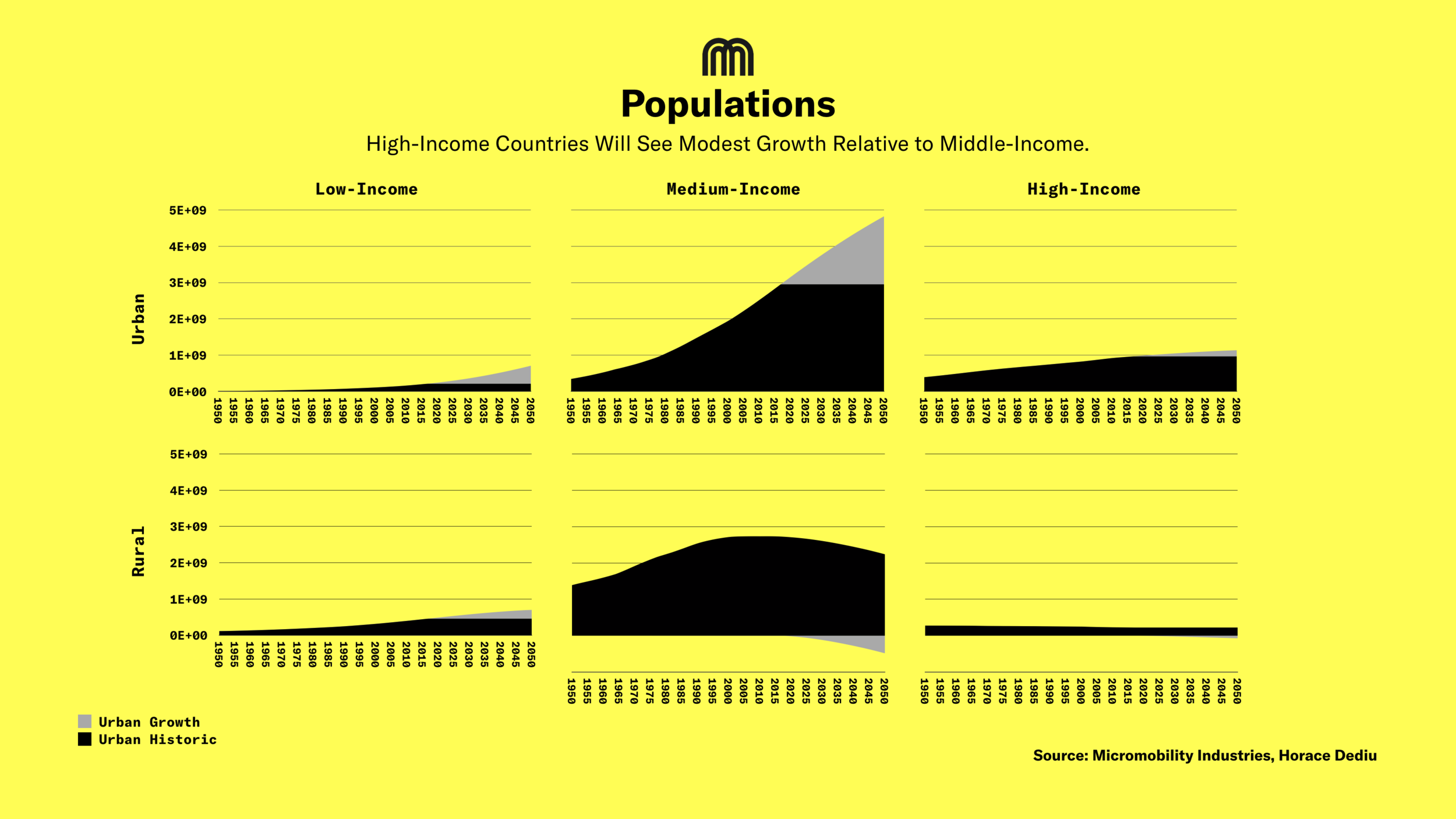 One of the rather unique aspects of micromobility is that it’s a collection of inherently urban modes and applications. Motorized personal transportation has historically been designed to shrink long distances and early applications of sail, rail, road and flight were to shorten gaps between cities, i.e. ex-urban travel. Micromobility is, along with transit, a solution for urban areas.

In any introduction to micromobility I make a note of urbanization. It’s a steady trend; it has been increasing since cities were first conceived and we’ve had tremendous growth in the last century. The urban population of the world has grown rapidly from 751 million in 1950 to 4.2 billion in 2018 and will reach 6.7 billion by the middle of this century.

This megatrend is powerful but it requires more detail. Cities are big places to think about and all cities together is a concept that is hard to visualize or consider what to do with. The analysis needed is one where cities are categorized into addressable markets. Addressability means investors and entrepreneurs can plan and act on patterns.

This is urban/rural population history and projections by income:

This view permits a contrast between the opportunities in lower income levels relative to the current foothold markets in high-income markets. The propensity of micromobility services to target only high income (to date) is probably due to the higher likelihood that wealthier consumers are willing to spend on this new service relative to poorer consumers. This was the same perception during the early years of consumer products over the last century. Appliances, entertainment technologies, personal computers and mobile phones followed this pattern.

However, growth in lower income countries eventually overtook high income countries and the companies that came to dominate appliances, consumer electronics, personal computers and mobile phones are situated in what used to be middle-income countries. In my opinion it’s inevitable that micromobility will expand significantly in middle income countries as they create the bulk of urban transportation demand.

To make the point more clearly, I looked at the data on urbanization on a city-by-city basis. The data, also from the UN, covers 1860 cities or, more precisely, urban agglomerations with 300,000 Inhabitants or more as of 2018, and their populations every year from 1950 to 2035. The following maps show the populations in relative proportions are bubbles on a map:

We will go deeper into this data at the Micromobility Conference in Berlin, and Oliver and I also released a podcast discussion today on this data, but I wanted to highlight a few observations:

- The growth in urbanization in India and Africa is staggering, and it should be the focus of many minds in micromobility. Here is a list of the top 20 cities fastest growing conurbations, which will add 139 million to their populations:

- Growth in developed countries is modest and even negative. Though there is an opportunity to compete with automobility in those markets, and perhaps to create new demand, the opportunities for addressing new consumption lie elsewhere. These are the least growing (actually shrinking) cities in the next 15 years:

I would also look at Malaysia, Vietnam, Philippines, Indonesia, Peru and Colombia.

- Solutions for mobilizing 2.5 billion new users in new markets will be very impactful. It will be much easier to provide sustainable transport for non-consumers than to switch them later.

Micromobility is not a solution for the wealthy or for old cities. It’s quite the opposite: it’s low-end nature implies that it’s a better solution for the least wealthy and for new cities. I don’t have to make this an appeal. The application of micromobility in low and middle income countries is inevitable. The only question is who will do it.