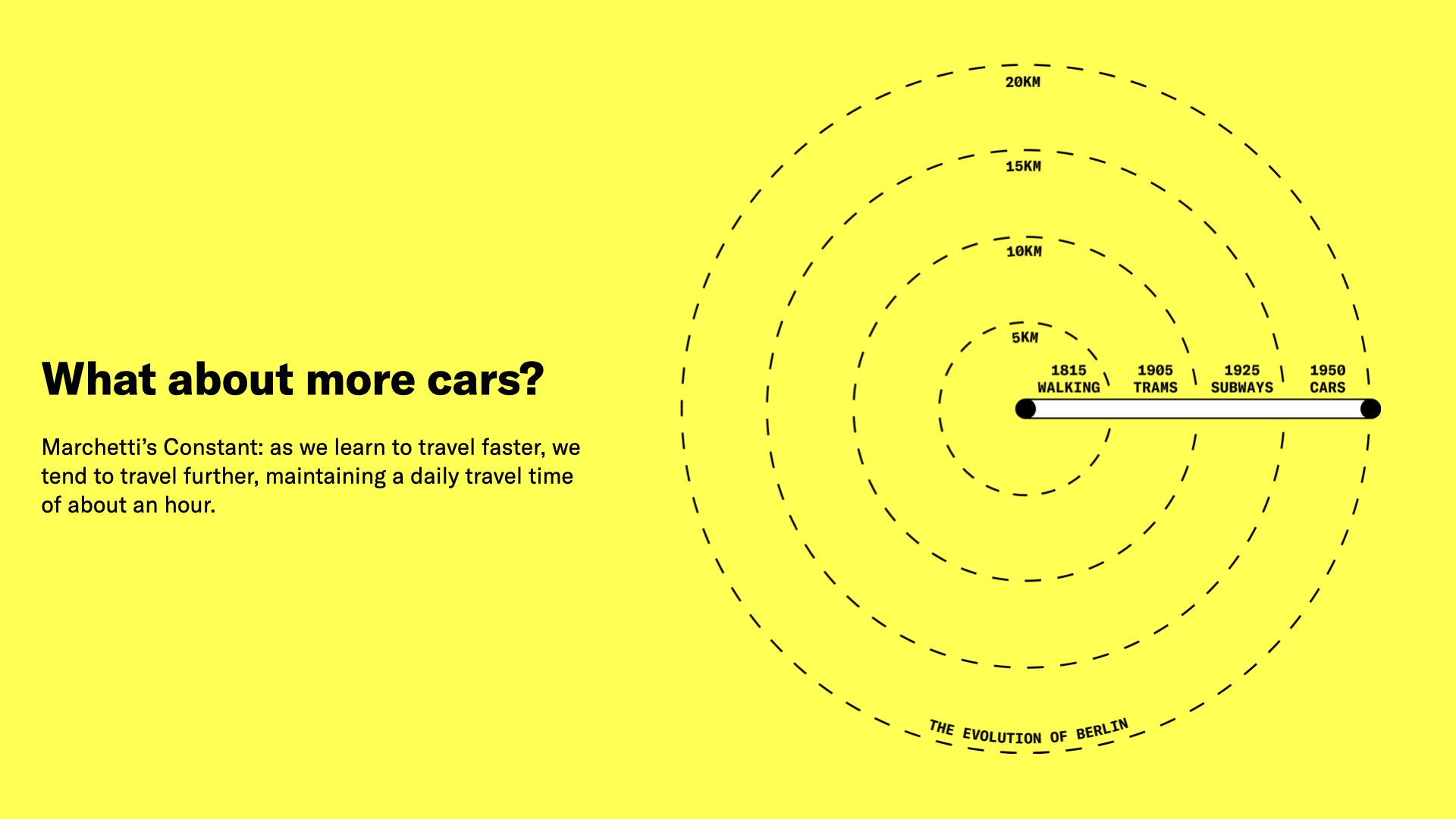 Space and time thus define the human activity range, with transportation providing the basic means to cover and extend our “activity radius". This is true whether we consider early hunting, gathering, and agricultural societies, or more recently - industrial and post-industrial civilizations. The movement of people, goods, and information has been vital to the functioning of all societies.

Empirical evidence suggests that the time devoted by an individual to transportation appears to be close to an anthropological constant: it ranges from around 1 to 1.5 hours per day, both in rural-agricultural and urban-industrial societies.

Ancient Athens and Rome were essentially pedestrian cities, and it’s been noted that their spatial size never exceeded the distance a person could cover within a maximum of 1.5 hours of walking time. The diameter within the walls of imperial Rome was approximately 4 kilometers (2.5 mi.)  (The area or range that an individual can reach by walking defined the "economic” zone around any settlement well into the 20th century. It continues to do so for the rural population of most developing countries.)

This evidence was most convincingly put forward by Zahavi. In his Unified Mechanism of Travel (UMOT) transport model, the range covered or distance traveled by an individual is defined by two constraints: the available individual time budget (1 to 1.5 hours per day) and the available money budget (around 15 percent of disposable family income).

The table above from the US Bureau of Labor shows that Americans who travel spend about 1.46 hours doing so each day. (n.b. - 2020 saw a decrease due to the Covid pandemic. Other historic crises have also caused a transient dip in travel.) The reason for this is that we have other critical activities that we need to perform and travel time is particularly non-productive.

We need to sleep, eat, work, care for ourselves and others, shop, and have time to relax or be entertained. We tend to have natural budgets of time for all these activities. Eight hours for sleep and about the same for work. Perhaps we devote one to two hours a day to meals. We feel really bad if these budgets are constrained and we can cease to function or exist if they are eliminated.

This led to the theory that humans have a “time budget” to spend on travel, and if they have the means to travel faster, they will fill their time budget by traveling further. If they have limited means for travel, they will only go as far as that budget allows.

Marchetti investigated the concept of the time budget for travel in the 1970s, using surveys from the 1950s and 1960s, and noted that the one-hour time on average remained relatively constant. He also looked at travel times across history, stretching to ancient times. It didn’t seem to matter whether you lived 100 years ago or 1,000 years ago – it remained constant.

What determines the possible range that can be covered by an individual is availability, costs, performance, quality of transport infrastructures, and the technologies available to make use of these infrastructures. The most decisive performance is probably speed. Speed that exceeds the limits of human capabilities is provided by access to technology.

Marchetti saw human beings as territorial animals that, under this fixed time and budget constraint, will try to maximize their range or territory. Transport technologies and infrastructure thus allow for the "control" of territory and the expansion of the range beyond that defined by our inherent human ambulatory limitations.

This is why we like to say – only half-jokingly – that the car has two jobs to accomplish.

The first job is to bring people closer together. People drive to work or to meet socially. The second job is to pull people apart. People are attracted by the idea of living in the open space and solitude of an estate - perhaps connecting it to an old desire for the idyllic castle on a mountain - and the car does that job, too.

We want to be together, and we want to be apart. The car allows both these contradictory impulses to be indulged, and that’s why it’s been such a powerful symbol of freedom.

When you pause to contemplate it, it’s a fascinating idea that when we got the car, we didn’t shorten our journey times. We could have kept traveling the same distances and saved a lot of travel time in our day. Instead, we still filled up that hour with longer distances.

The implication of this is that the time budget for travel time of an hour is not just a maximum, it’s also a minimum. If a flying car, that could go 200 miles per hour, was invented, and widely adopted, eventually you’d see large parts of the population moving 100 miles from work (30 minutes each way).

This is at the root of the paradox of induced traffic, when you create wider roads and you expand the road network, it fills up with more traffic. It’s one of the most fundamental laws of road design, the notion that the development of infrastructure induces its own demand.

One of the most famous cases is the Long Island Expressway in New York which connects Manhattan to the eastern edge of Long Island. The Expressway was built in response to congestion but on the first day of its opening, it was jammed, and it has stayed congested ever since. If you doubled the width today, it would continue to be congested.

One of the interesting questions is how would Marchetti’s Constant factor in autonomous cars?

Would “car time” be perceived differently than “drive time”? I think not. Because “car time” could well be analogous to “train time”, which did not increase our time budgets vis-a-vis walking.

The assumption is that with “riding” vs. “driving”  options, travel is less onerous because you can focus attention on other things and be more productive. It’s logical to surmise that part of the reason for the one-hour budget limit is we don’t want to tolerate any larger loss of productivity in our day.

But we are quickly bored waiting for a journey to end. Even if we can read, watch videos, or meditate, the dread of “not being there” yet is ever-present. Consider long-haul flights. We chafe under the constraints even when coddled with opiates in the form of videos, meals, and drinks. If we had a faster way to go, we’d take it in an instant (provided the cost increase fit our budget.)

Despite small regional variations (such as Japan), we shouldn’t be blinded to the fact that this law has seemingly applied in most circumstances for millennia. The insight provided by Marchetti’s Constant gets more interesting when you notice that more speed does not lead to cuts in the time budget for travel in a day. People still use their hour; they just go further.

This understanding of the human condition; that we spend a fixed time traveling is useful but it’s not the whole picture. Given the various modes we have available, can we guess *how far* and with what probability we go the distance?

As we think through how to change the future of mobility, we have to put this frame around everything. The behavior of humans toward resources is very consistent. Whether it's energy, speed, or capacity for transport, we tend to maximize any improvements, not save them. The tolerances we have, serve as both a floor and a ceiling.