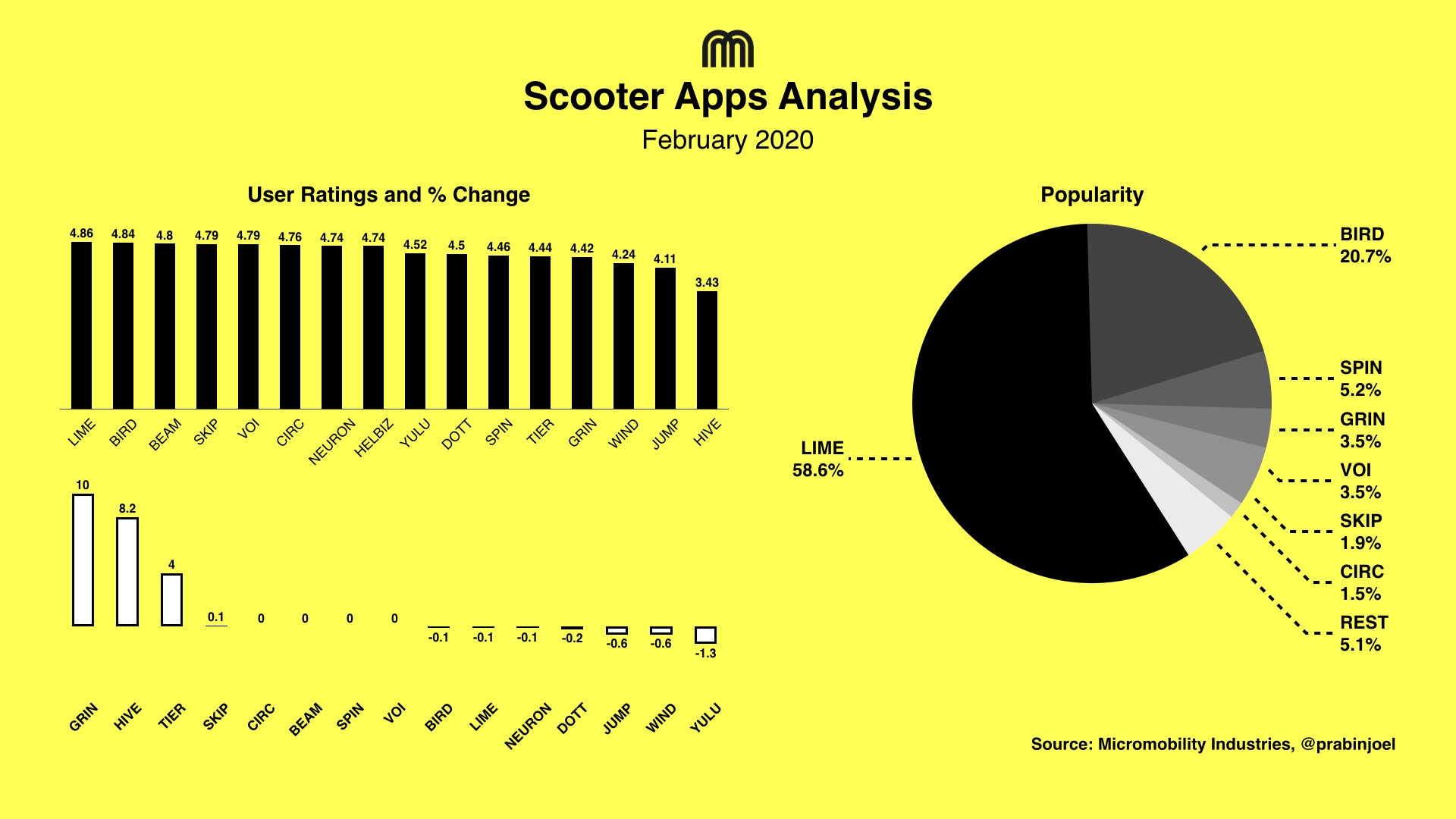 Similar to previous months, in February Lime retained the top spot in average user ratings among scooter companies in the Apple and Google app stores (4.86/5). Lime also continued its reign as the most popular of all operators worldwide in terms of activity. a European technology company that provides connectivity solutions for lightweight electric vehicle platforms.

Other apps saw increases in user satisfaction in February, reversing a trend earlier this winter, when user ratings were stagnant across the board. The average user ratings jumped 10% for Grow, 8.2% for Hive, and 4% for Tier last month. For Grow, this was the first positive growth in months. Although Hive is still trailing far behind others, it has been steadily improving its rating over the last two months, suggesting the service is making much-needed improvements.

In terms of popularity, as measured by activity in the app stores, Neuron Mobility saw the highest increase (23%) last month, followed by Hive (12%).

Going through all user-reported issues in February from the comment sections of the app stores, most problems can be grouped into a handful of categories:

App Issue – 34%: Bugs related to the apps themselves were the most-reported problem in February, similar to the previous month. This category includes issues with login, time to load, and payment setup. Here are some sample comments.

App logged me out and when I tried to log back in told me I couldn't login because my email was already in use. No way to go back, closing and reopening the app ends up stuck on the same screen. What a buggy mess

Scooter Issue – 12%: Hardware malfunctions with the scooters remain common, with reports of failing brakes, low battery, and scooters shutting down for no reason. This month, there were two incidents where an accident was reported, both related to Spin. In one case, the user was reported to have broken an arm. Here are some illustrative comments.

Can be very risky, specially for the learners. The speed can go pretty high very fast, no acceleration system to control the speed. I had an serious accident while riding and broke my arm.

Tried 2 scooters, both had no battery power despite saying otherwise. Charged me $2 to go 300ft.

There are few operators that provide a mobile holder/charger attached to the scooter stem. A WIND user reported that a faulty holder resulted in a broken phone.

Added a payment method on android phone, my card was charged instantly 50 PLN, cannot remove payment card info without contacting a support, and support does not responding. Got charged 8 additional PLN without even unlocking scooter. Scam

MY RIDE IN THE APP WAS $5.00 BUT I WAS CHARGED over $20, the scooters are slower than uber/ jump scooters, I would not recommend this at all

Cannot Start/End Ride – 14%: While users continue to have trouble with the “End Ride” app features, there seems to have been an improvement with “Start Ride” functionality across the board, with an 8% overall drop in complaints since January.

Tried six rides, lock does not unlock 50% of times. Still charged for everything.

3x today the damn things wouldnt let me end the ride. Spent a total of 16 minutes paying for s*it i wasnt using just trying to end the ride. I want to be reimbursed for this BS

I have been trying to end a ride (2 scooters) for 40 minutes!! The trip was $25 and it would not let me end ride due to network error! The ride is now $60 and counting! Nobody there to answer tech support phone call, been on hold over 30 minutes! DO NOT USE THIS SERVICE I am still being charged.

Customer Support, Unavailable Scooters, Expensive, Others – 29%: Customer service problems were less common in February, at only 3% of total comments. Interestingly, European operators seem to respond to more comments in the app stores than non-Europeans. Expensive and unavailable scooters together made up 6% of complaints.

In the “Other” subsection (20%), one user reported a harrowing incident in which his pregnant wife was hit by a speeding Jump bike on a sidewalk.

Pregnant wife was just hit by a jump bike. My wife and I were on vacation walking out of a museum and someone was riding a jump bike going full speed, downhill, and illegally on the sidewalk. I tried to block most of the impact but she was still thrown to the ground and now we are on the phone with her doctor trying to figure out how to get an emergency ultrasound. She also has a bruised elbow, side, and limited motion in her arm. Cities lack proper bike lanes and riders can't operate safely.

Note: Data gathered from 150+ Apple and Google app stores across the globe. If interested in more insights on the data collected, contact Prabin Joel Jones.