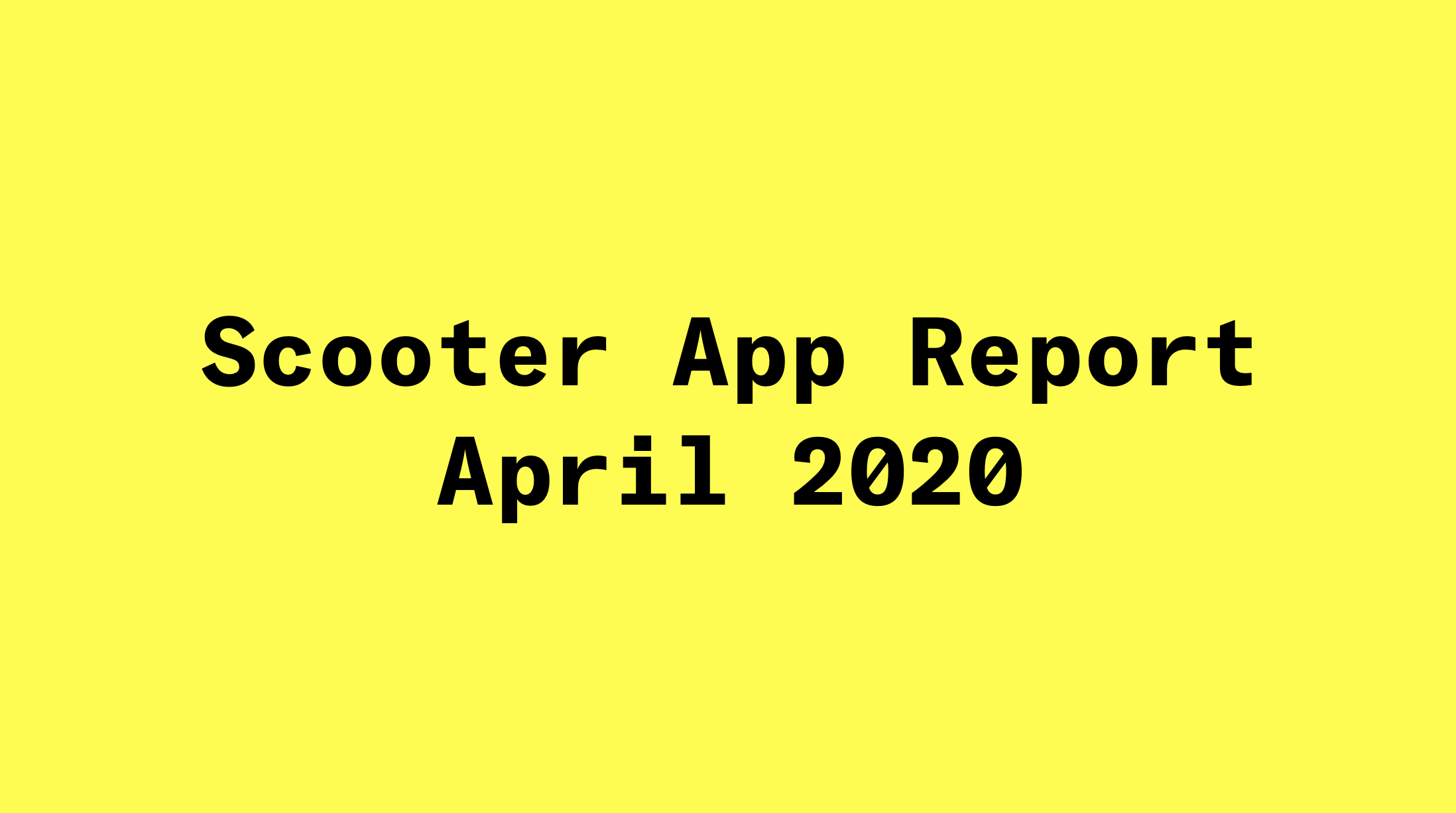 April was the first full month of the Covid-19 pandemic and, as such, it was not an easy time for shared micromobility providers.

Last month Lime continued to hold the top spot in user ratings (4.86/5) among all scooter companies. It also retained its lead in all-time cumulative app store activity (58.1%), but Tier saw the highest month-over-month gains in activity in (21.9%), followed by Bird (18.6%).

The total volume of app store reviews collapsed 86% compared to March as shelter-in-place orders spread. Grin’s activity declined the most month-over-month (-96%), followed by Lime (-95%). Tier, suffered the least, experiencing only a 16% decline.

Keeping December as the baseline, app store activity has declined by at least 75% for every single operator except for Tier, whose activity has gone up an astounding 155%. Growth such as this during the middle of a pandemic is hard to explain, but it appears Tier has hit on an engagement formula that improves on its pre-Covid baseline.

Faced with falling demand, many dockless scooter companies, like Lime, chose to suspend service completely, while others, like Dott and Spin, kept operating with reduced service. You can see these different policies reflected in last month’s activity data.

With Lime withdrawn from 99% of its markets, Tier replaced the California-based company as the most popular scooter app globally, controlling 20.1% of activity worldwide. Tier also took the top spot in its home market, Germany (60.5%). In France, almost all of the activity was concentrated on Dott (97.6%). Voi saw the highest activity compared to others in its home market, Sweden. In the U.S., Spin leapt ahead of both Lime and Bird to claim the top spot (59.4%).

Net Promoter Score (NPS) is a tool for quantifying customer loyalty. Companies generally calculate NPS by asking customers to rate their level of satisfaction with the business on a scale of 0 to 10.

Similarly, app stores ask users to rate their level of satisfaction on a scale of 1 to 5. To calculate NPS for the scooter apps, I applied the following method, trying to replicate the classic scoring system.

Although Lime ranked the best globally, in some key European markets, local players scored higher in customer experience. In Germany, Italy, Spain and France, Voi or Circ (now part of Bird) had a higher NPS than Lime. On the other hand, in Sweden, both Bird and Lime scored higher than their European rivals. Lime also led in the U.S. as well as Australia, followed by Bird and Beam, respectively.

Going through all user-reported issues in April from the App Stores’ comment sections, most of scooter issues can be grouped into the following categories:

App Issue – 36%: Bugs related to the sharing app were the most-common user issue in April, similar to the previous month (28%). Users reported issues with time to load, login, payment setup, and more. Here are some of the comments:

Buggy, doesn't show actual balance during the ride, in the end u don't know how much the one will be charged. I've chosen not to re-charge automatically but the app tries to charge me again and again

It will not allow me to add a credit card to my account, and I can not use Google pay with the app either for some bizarre reason.

Mobile authentication is common in micromobility, which can lead to issues with phone number recycling. A Jump user reported having login trouble related due to this problem.

NO STARS IF I COULD. Uber doesn't allow accounts without a phone number but if someone used your phone number years ago before you had it, it's impossible to make an account! Fix this!

Overcharging – 14%: Users reported being overcharged on rental fees by multiple operators. One Lime user claimed to have been charged a fee without having used the app in over a year.

Not used in over a year because they offer the slowest scooters out of all their competitors. Yet they just charged me 22kr. Unable to reset my password to find out what is going on and disconnect my card.

Unable to Start/End Ride – 17%: Similar to previous months, users reported issues with starting and ending their rentals. Two separate Spin users reported waiting around 7 minutes for the app to recognize that their trips had ended. And because most operators charge per minute, these delays can end up costing riders money.

Scooters are ok, but both times my husband and I used them it took more time to "END" the ride then the actual ride itself. So for a 2.5 min ride it took nearly 7 min to stop the ride. Charged us for 10 min. App is horrible and closes you out and is just awful.

I cant end ride and than get charged More

Scooter Issue – 13%: Although no accidents were reported in April, unlike the last two months, users did complain of dead batteries, motor issues, and other mechanical problems.

DON'T DO IT. I finally decided to try one and the battery died leaving me in a no park zone so I had to walk it back to a park zone. When I called to get a credit they promised to do so ONLY after I threatened negative reviews. They said I should have just parked it and of course since I was in a no park zone that was not possible. After the agreed to refund they didn't follow through. The $7 is not worth my time to fight them, but buyer beware!!!!!!

I was charged $27.50, the motor didnt work and i only went literally 3ft before i decided to walk.

Customer Support, Cost – 19%: A few users wrote that they felt the price of their scooter rental was too high and one Skip user complained about unlock fees in particular. There were also reports of bad customer service, with multiple Yulu users citing issues getting their security deposits refunded.

Minimum flat fee is $3 even if youre on the scooter for one minute. I'm deleting the app and using Uber or Lyft scooters. I really loved Skip scooters and would seek them out over all the others scooters in DC until this bone head move. Bye bye skip

BIG SCAM, they won't refund your money and if contacted for a reason, they will tell you to wait for indefinitely and won't respond to any other queries, great customer satisfaction, you can totally trust them with your money and safety of their products.

Finally, in addition to the usual user feedback, Bird was hit by a wave of negative reviews from users who were unhappy about the way the company laid off employees last month.

I'm deleting my app. I'll use Lime next time I need a scooter. The cowardly way you guys laid off your employees is shameful. Shame on you.

Just downloaded this app so i can make a review. Like how you fired so many people off your company like that. Congrats. You f-ed yourself. Hope you go bankrupt

Can't continue to support a company that fires hundreds of workers during crisis.

Note: Data gathered from 150+ Apple and Google app stores across the globe. If interested in more insights on the data collected, do send me a message!