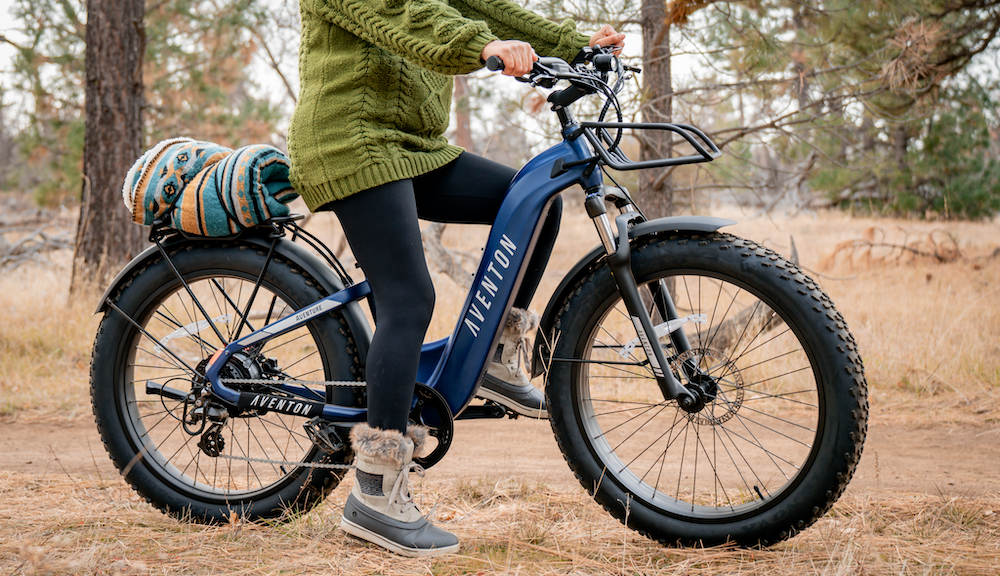 What You Need to Know Today

Aventon announced an update to the highly popular, heavy-duty Aventure (a budget-friendly bike we like a lot). Like its predecessor, the new Aventon Aventure.2 is a Class 3 bike with fat tires and 750W rear hub motor for tackling mixed terrain, but with some key upgrades, namely a torque sensor that provides a much more responsive pedal assist.

This company from Poland is pioneering electric cargo scooters (both stand-up and seated) for hauling big loads of stuff.

Juiced is out with a handsome limited-edition version of its 35 mph Hyperscrambler 2.

Ride1Up just announced a new SoCal-inspired electric bike that looks more like a mashup between a moped and a minibike than the company’s traditional commuter bikes. The Ride1Up Revv1 is powered by 750W motor to reach speeds of up 20 mph using either throttle and pedal assist. (It’s also possible to unlock a Class 3 mode—and 28 mph speeds—by contacting customer support). The bike comes in two versions, front suspension and full suspension, both of which are priced competitively ($1,899 or $2,399, respectively).

The world has been waiting for years for Honda to release an electric version of its famous Cub motorbike. Now that it’s here, does the $885 EV moped live up to the hype?

NPR shares stories of families who traded their cars for electric cargo bikes. Spoiler alert: They saved a bunch of money and are much happier now.

The second-generation of Bugatti’s little-known electric scooter is here and it’s tougher, tech-ier, and 10% larger.

Okai, a top manufacturer of shared scooters, will push further into retail with its next commuter ebike and first-ever eTMB coming later this year.

With a total possible payload of 440 lb, Fiido’s new T1 Cargo Pro bike can lug pretty much anything you need.

Google Maps now shows you the percentage of bike lanes on your route that are separated from motor traffic.

Harley-Davidson’s CEO says that the brand will be all-electric one day… but the transition will take decades.

A British YouTuber biked across Luxembourg on a Barbie bike.

Imagine trying to to pick out your bike from a lineup of thousands… Amsterdam just completed a 7,000-bike underwater garage at its Central station.

Speaking of Amsterdam… Micromobility Europe is coming to the world’s car-free capital this June for a stacked lineup of talks, demos, press tours, networking, expos and so much more. It is going to be a truly unbelievable get-together for anyone who cares about small electric vehicles. And for the next 24 hours, Early Bird tickets are on sale for ⅙ of the full price. Book yours now.

The Raleigh Motus Grand Tour ebike offers a great combination of comfort, convenience, and quality that makes it a great choice for everyday city riding.
The lightweight frame and powerful motor make the bicycle easier to handle and provide more control than other electric bikes.

When riding on urban roads, you can encounter motorists who do not pay attention to bikers. You need a great bike horn to make them notice you. One great bike horn to consider is the DAWAY A14. Using this horn and its many sound modes, you will surely turn some heads.

The AW electric bicycle motor kit is one of the most convenient and affordable ebike conversion kits on the market. You can install it on a front or rear wheel and almost any bicycle frame and bicycle type.Just make sure that you get a suitable battery for it.