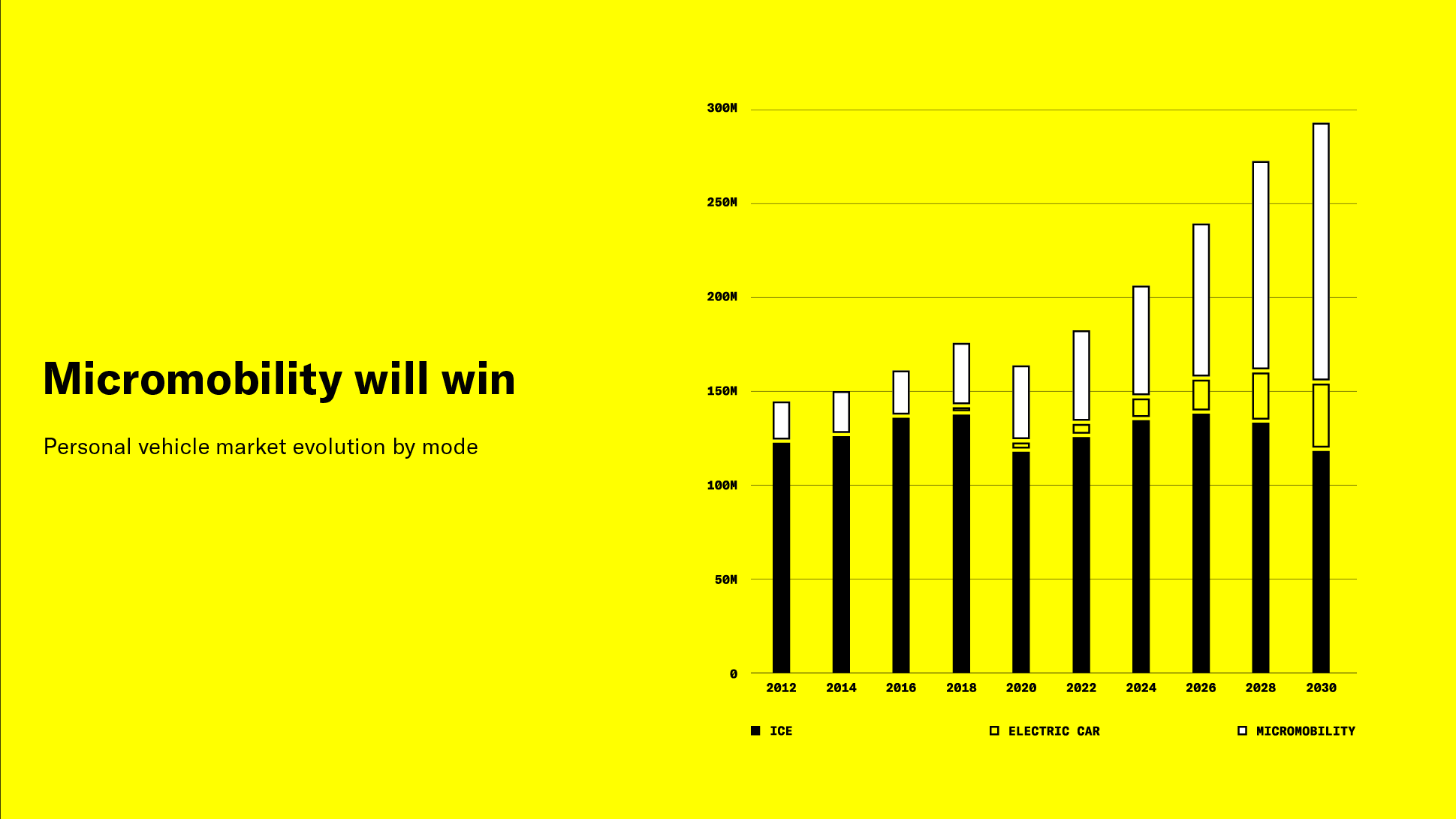 While I didn’t coin the term “micromobility” until 2017, by 2015 I had already begun laying the groundwork.

At the time, I was working at The Christensen Institute for Disruptive Innovation, studying the future of automobiles. I thought the disruption that transformed the mobile phone and personal computer markets could be applied to the car industry.

Unfortunately, my efforts were not yielding results. I couldn’t see a path for car disruption.

Low-end (i.e. cheaper, lower performance) cars were not successful, due to the used car market. New ideas, such as electric drives, communications, and autonomy, were likely to be sustaining innovations, rather than disruptive.

I looked at safety technologies and in-car entertainment and saw how these innovations increased profitability, rather than dissuading automakers from adoption. Nothing was being left to entrants in order to establish new measures of performance.

Then, by happenstance, I took my first ride on an ebike. Within 20 minutes, I had an answer which eluded me for years. And, in the memory of Clay Christensen, I will explain precisely why micromobility is disruptive.

Disruption is a specific type of innovation that affects the competition between entrants and incumbents in an industry. The outcome of a successful disruption is that entrants displace incumbents in terms of profitability, relegating former leaders to trailing positions or forcing them to exit the market completely.

The opposite of disruptive innovation is sustaining innovation. This occurs when the competition favors the incumbent who, having more resources, more customers, and better market information, retains their dominant market position.

1) Is there a technological core that enables the building of an asymmetric business model?

If the new idea is a refinement of existing technology, disruption is not likely.

2) Is there an asymmetry in business models?

This means that the core idea is adapted into a solution that does not offer more profitability or even creates a loss-making business for the incumbent. This is the notion that incumbents are not persuaded by a business model that is “worse” than what they currently have. If the disruption candidate proposition is “a widget that is better” (where “better” means more profit), then there is no likely disruption.

3) Does the new business propose a new measure of performance?

In other words, is what the marketplace defines as good or valuable being changed? An industry has an implicit set of metrics that competitors judge themselves by. It could be a specific measure, such as 0-60 mph time or mean-time-between-failure. If the proposition is more convenience, more availability, or lower price where performance is defined by measuring the product itself, then disruption is possible.

4) Are the customers “high-end” who demand more performance, and are willing to pay for a new solution, or are the customers “low-end” who respond to good-enough solutions at lower prices or in new contexts of usage?

The tell-tale sign is whether improvements in performance are absorbed. That is, whether a gain in performance comes with a price and that price is gladly paid.

5) Is there a trajectory whereby the low-end product can improve into a high-end version that slowly but surely converts mid-market customers and eventually all customers to the new solution?

If a low-end solution cannot evolve profitably—that is, if version 1 is not followed easily by a version 2 that is more valuable and desirable—then disruption is not likely.

All five of the above indicators must be achieved in order for a disruption to occur.  So, with these indicators, can we assess the possibility of micromobility being a disruption?

There are at least 5 enabling technologies at the core of micromobility:

These core technologies are combined with computing and software, which create a “software-defined” product or service. These same technologies have been very slowly adapted to incumbent modes of transport (such as cars). And in those cases, they are offered as improvements in efficiency, rather than a new mode altogether.

The business models of automobiles are rather rigidly set around scaled manufacturing and servicing fleets. These vehicles are licensed, distributed, serviced, insured, registered, taxed, fueled, provisioned with infrastructures, and regulated through a web of interconnected value chains.

The total cost of car ownership is very high and rising. The profits are set according to capital allocated, a tiered supplier network, and a global homologation regime.

Micromobility vehicles are none of these things. They do not fit into the web. The business models are emergent: owned, rented, leased, shared/hired. Supply chains are ad-hoc and regulations vary wildly. It’s not at all clear yet how money is made.

The automobile is known for power, range, speed, comfort, and prestige. Micromobility is known for being low-powered, low-range, low-speed, low-comfort, and having no prestige at all. It is also known for being fun, exciting, liberating, cheap, economical, ecological, and quite convenient for small trips. Small trips in particular become the new basis of observation.

Unlike the electric car, which appeals to more affluent customers, micromobility vehicles typically appeal to a youthful, casual urban user. In the case of European ebikes, the earliest adopters were the elderly who sought open-air active mobility but found regular bicycles too difficult to use. In growing economies and in China, micromobility vehicles are appealing as a first- or last-mile solution for transit users.

A Trajectory of Improvement

After only a few years, micromobility has seen multiple iterations in vehicle design and components. Typically, scooters and ebikes are updated yearly with R&D improving functionality such as multiple motors, balancing, ABS, traction control, and sensing. Like fruit flies, the smaller the vehicle, the faster it will evolve.

Entirely new form factors, such as 3- and 4-wheel designs, are abundant. Top speeds are rising, as are ways to protect the users. Wearable technologies (e.g. Apple Watch) are being considered for use to enhance the experience for the rider. The concerns with safety, theft, weather protection, and comfort are constantly being evaluated by designers.

My observation with micromobility is that all the conditions for disruption are being met, with the additional observation that incumbents are not responding in kind. While some automakers are producing ebikes or other forms of micromobility, these efforts have been less than serious (read: capital or management attention).

Even automotive companies that owe their existence to low-end entries (Ford, VW, Toyota) or maintain motorcycle divisions (Honda, BMW) are not investing heavily in micromobility. To the extent that there are efforts towards micromobility amongst OEMs and Tier 1 suppliers, those efforts are killed by “antibodies” to disable progress within the organism. I have seen too many examples.

One final word. It’s tempting to think of incumbents as the makers of machines, but there is a vast network of enablers: infrastructure developers, governments, and policymakers, just to name a few. They too are incumbents fixated on sustaining automobility. They too are subject to tunnel vision.

They too will be disrupted.