A Modicum of Transport: The New Measure of Competition for Mobility 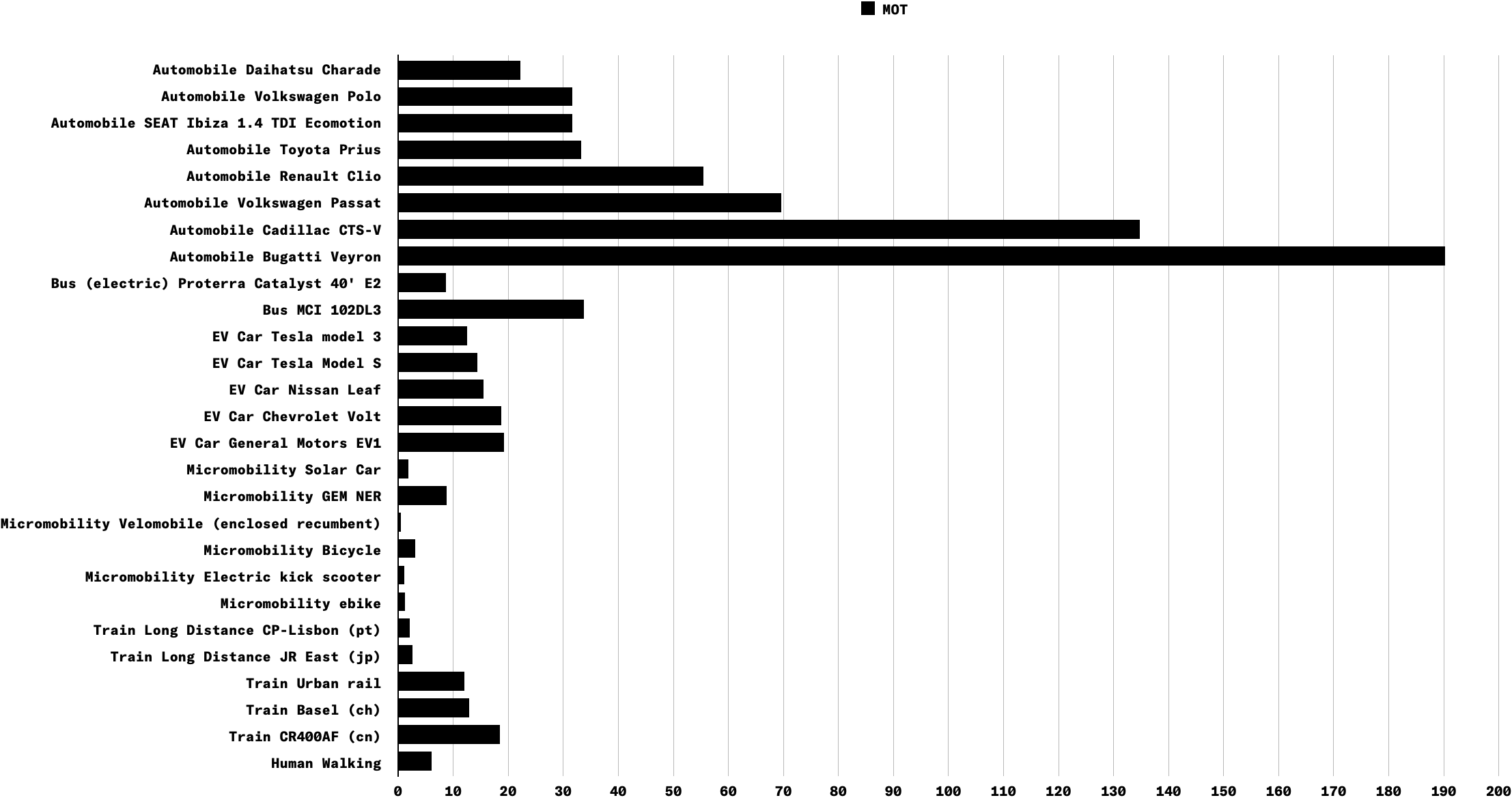 Let’s say you invent a new machine, how do you define its benefit? For a machine, you can say its performance is better than what existed before it. You can use an existing measure of performance and plot your invention along that basis. A bigger screen on a phone, a faster car, a smaller AirPods. But for a drastically new thing, you have to create a new metric.

Consider the Watt steam engine. Nothing quite like it existed before 1776. There were wind- or water-driven machines, but they didn’t have the reliability or universality of a machine that could be placed anywhere. To help convince buyers, its inventor, James Watt, defined a new metric that he called the “horsepower.” With it, he created an equivalency between the work his machine could do and the average work a horse could do in the process of pumping or lifting—the primary jobs a horse was “hired” for back then. In those early years of the steam engine, the potential value of a machine with one or a few horsepower would be extremely high because horses were expensive to keep and rear, with limited life spans and duty cycles (times on/time off duty). Watt was clever to define the metric this way, as it allowed his steam machine’s pricing to be compared with the cost of maintaining a stable full of horses.

Horsepower became the buzzword of 19th-century machinery, and remained so well into the 20th. We used it to measure all kinds of machines, including aircraft, ships, and cars. We still use it to describe how powerful machines are, even if we are not using those machines to replace horses. We have long lost the perspective of what work a horse can do, but we maintain a measure of performance from the pre-industrial era.

Next consider the computer. It is a computation and storage machine, so its performance cannot be measured in horsepower, but rather in calculation speed and storage capacity. Mechanical and electronic computers replaced people acting as calculators and filing cabinets. The inventors of computers did not define the power of their new machines by how many human calculators or cubic feet of filing cabinets they replaced, but with the speed of the “clock” which stepped through instructions. This was the “Mhz,” or million cycles per second. Storage came to be measured by the “byte,” which is 8 bits or the amount of memory needed to store one character or basic integer. The computer era became known for its Mega- or Giga-hertz and the Mega-, Giga-, and Tera-byte. Feeds and speeds of the information age.

Next consider the internet era. With the new business models that emerged in the 2000s, we saw “engagement” as a measure of performance. Rather than counting money spent, companies began to measure the attention of users. Hence the MAU, DAU, and dwell times. The “active user” came to replace the “customer” as a metric of company performance. This new jargon of attention and audience came to be the lingua franca of the Web2 era. Undoubtedly, as we move to Web3, a new measure of performance will also emerge.

These examples show that, when an innovation is truly without precedent, we invent new metrics to go along with it, both to explain the new technology (as Watt did) and to measure how it improves upon what came before it. Eventually these new measures become taken for granted and join our everyday vernacular. But do think for a moment about how indicative of change a new metric is: it is literal proof that a new measure of performance, and hence a new market, has been created.

So what terms will accompany the advent of micromobility?

Well, we are certainly not using automobility measures of performance. Remember the horsepower? It got carried from steam engines (nb: external combustion) to internal combustion engines. Cars are still measured by this metric. And now, in the electric car era we’ve begun using range, which is necessary because charging a car is slow and must necessarily be infrequent.

But when the power and range of the vehicle is irrelevant (as is the case with micromobility devices), we need a new metric. 150 to 400 horsepower is necessary (maybe) to move a 3000lb vehicle, but it’s far more than what is necessary to move a person, a product, or a meal.

And moving people, products, and meals is what micromobility is for. And fortunately for the climate, it is an efficient method of moving these things.

Note that we already have an efficiency measure for automobility, “mpg” (or l/100km), but mpg is centered on the vehicle and not on the payload. Indeed, regardless of whether a car has 1 passenger or 5 passengers, we don’t expect its mpg performance to change much. The focus is not on value delivered to the user, but the cost to move the vehicle.

The yardstick of performance for micro vehicles should be different. It should be centered not on the vehicle but on the passenger. As such, I propose a new yardstick metric which I call the MOT.

MOT stands for "Modicum Of Transport.” It is defined as 1MOT = 0.1kWh/kgkm (or 10kWh/100kg*km). Plural is “MOTz.” It’s the nominal energy cost of transporting one person one kilometer.

MOT is meant to identify, as the horsepower and the byte before it, a unit of utility for a mode or service of transport, i.e. what is the cost (in energy usage and hence in emissions) to deliver a specific measure of output.

Note that MOT is not a “Minimum of Transport.” A modicum is a small quantity of something desirable. It may be possible to transport a person with a lot less energy. It depends on many factors. But the MOT is meant to give a basis to compare with a small enough unit to start with.

Now we can measure various modes of transport in terms of their MOTz.

This is a list of vehicles as published in wikipedia with respect to their MOTz rating. Note that all of the micromobility modes are close to 1 MOT.

That’s on purpose. It allows us to define micromobility as products or services which are rated as 10 MOTz or less—the highest level of efficiency.

Of course, MOTz are proportional to CO2 emissions and can be seen through a climate impact lens. MOTz are also proportional to dollars in terms of the cost of infrastructure, parking, and demand for roadways.

My hope and expectation is that the MOT becomes the new standard for defining not just micromobility but all mobility. It’s the right way to measure value and cost in a world where we account for all impacts from transportation.